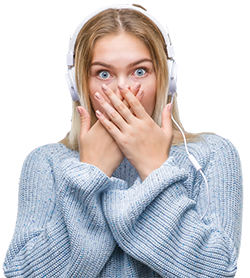 Striking a wrong note is the most potent tactic a North Carolina small business owner can use when advertising on Fayetteville radio stations. This can ensure commercials are heard and remembered.

At the moment a radio commercial starts, 11,000,000 other pieces of data are battling for the attention of the listener's ear. To win the fight, an advertisement must do the unexpected. Why?

Humans don't have earlids.  This means every sound a person is exposed to makes it as far as the brain. But, the brain can only process about 50 pieces of information at a time.  If you do the math, that means 10,999,950 bits never make it in.Making it past the brain's gatekeeper requires the information to strike a wrong note or violate what is expected  This filter supports the basic survival instinct. It's why someone will leap out of bed if they hear a stranger's soft footsteps while we are sleeping, but will snore right through their alarm clock.

This selective hearing evolved from the beginning of humankind.  A time when a caveman's survival required the ability to detect a stalking hyena from among the nighttime congregation of sounds from insects, rustling leaves, crackling fires, babbling brooks, and whispering winds.

This understanding of human behavior is the basis for rule #5 for creating a memorable radio commercial:  Add Surprise…a listener’s attention is drawn to the unexpected. This can be achieved by using multiple voices, interesting word choices, avoiding clichés, and changing the speaker’s tones and volume.

In other words, if a commercial on Fayetteville radio sounds like every other commercial, the listener won't be surprised. But, when a small business owner unexpectedly strikes a wrong note, then consumers' ears take notice.

The Beatles song Yesterday, which, of all the songs Mr. McCartney had a hand in writing, is one of the most popular songs ever. It holds the record for the most covered songs of all times and was selected by radio listeners as the number one song of the 20th century.

The song begins with an F7 chord. But, when Mr. McCartney sings the first syllable of the lyric "Yesterday", he sings a G-note, a note that is not contained in the underlying chord. Ouch!

The result is a dissonant note on a strong beat, which causes tension in the listener.  This is the musical equivalent of a hyena approaching. This is something unexpected and uncomfortable, so the listener pays attention. Humans can't help themselves. That's how they are hard-wired to survive.

By the second note, Mr. McCartney relieves the tension by gliding the second syllable of the word "yesterday" on to a very harmonious F note.  Musicians call this construction of singing a dissonant note on a major beat and then leaning into a harmonious note an appoggiatura. This is a musical ornamentation that takes the listener by surprise, demanding their attention.

Appoggiaturas have contributed to the success of Adele's song Someone Like You and Kermit the Frog's song Rainbow Connection.

A few seconds after Yesterday's opening appoggiatura, Mr. McCartney strikes the wrong note again. In a typical pop song, each verse comprises eight measures. But, Yesterday's verses contain only seven.  Once again, expectations are violated. When the verse ends before it's supposed to, the listener is put on edge and takes notice.

Doing the unexpected is scary. Business owners, for the most part, stick to what's safe.  That's why so many commercials on Fayetteville radio sound similar.

When in investing in advertising, Fayetteville small business owners are encouraged to take the advice of The Beatles, Adele, and Kermit The Frog: strike a wrong note and get heard.  If a commercial is not heard, then it won't bring in customers.

For examples of radio commercials that do the unexpected, click here.