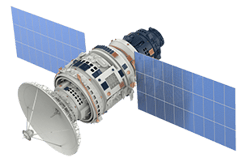 No! Satellite radio has had no effect on the number of people who tune-in to Fayetteville radio stations each.  For that matter, Pandora and Spotify have not affected local radio listening either.

The fact is, AM/FM radio reaches more consumers each week in Fayetteville than all other advertising media. Satellite, it turns out, has barely been a blip on listeners' radar.

Last week, for example, 93% of Fayetteville adult-consumers tuned-in to a local station vs. the 16% that connected to Sirius/XM, the only remaining provider of satellite radio service.

There is historical significance to the 93% reach number mentioned above.

In 2001, XM radio sent its first satellite into the cosmos. The company was hoping consumers would pay a monthly subscription in exchange for receiving access to hundreds of entertainment channels in their cars wherever they might travel.

The next year, Sirius launched a competing satellite radio service.  By 2007, both companies were, according to Goldman Sachs, were on life-support.  So, they merged into a single company.

Bottom line: Neither Sirius/XM nor Spotify and Pandora have altered the reach of traditional AM/FM radio.

Advertising on Sirius/XM does not make sense for a Fayetteville small business owner. Here's why:

So to fulfill the title of this article, here's what Fayetteville small business owners need to know about satellite radio: Despite Siriux/XM's presence in every new vehicle, very few people listen.