What is the Best Way to Advertise Retail Stores in Fayetteville? 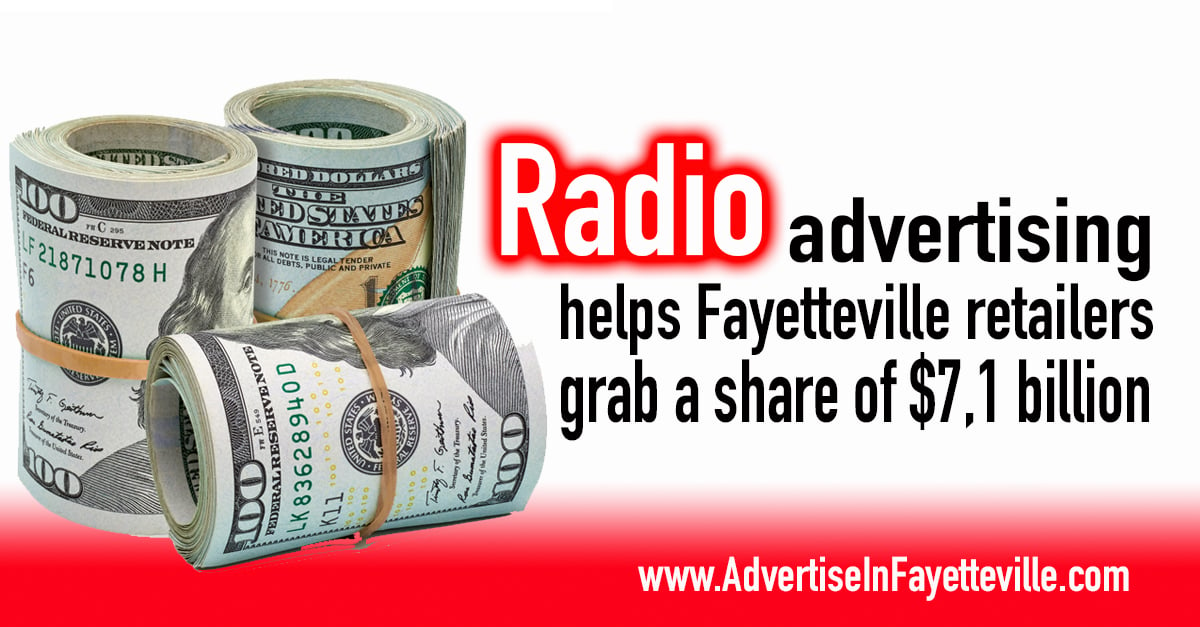 Over the next 12 month, Fayetteville area consumers will spend $7.1 billion on retail products.

Small business owners who want to compete for a share of this cash will need to advertise. As Professor Jef Richards at Michigan State University points out, “Advertising is totally unnecessary…unless you want to make money.”

Bottom line: Fayetteville consumers will only buy from retailers they know about.

There are many ways for Fayetteville small business owners to advertise. This includes local television, newspapers, or streaming media platforms like Pandora and Spotify.

But regardless of what product a retailer sells, the best option is advertising on Fayetteville radio. Radio reaches significantly more consumers in every major retail category than all of the other media choices.

Take carpeting and flooring products, for instance. According to Nielsen, 95% of all consumers in the market to buy floor-coverings. No other local media option comes close. 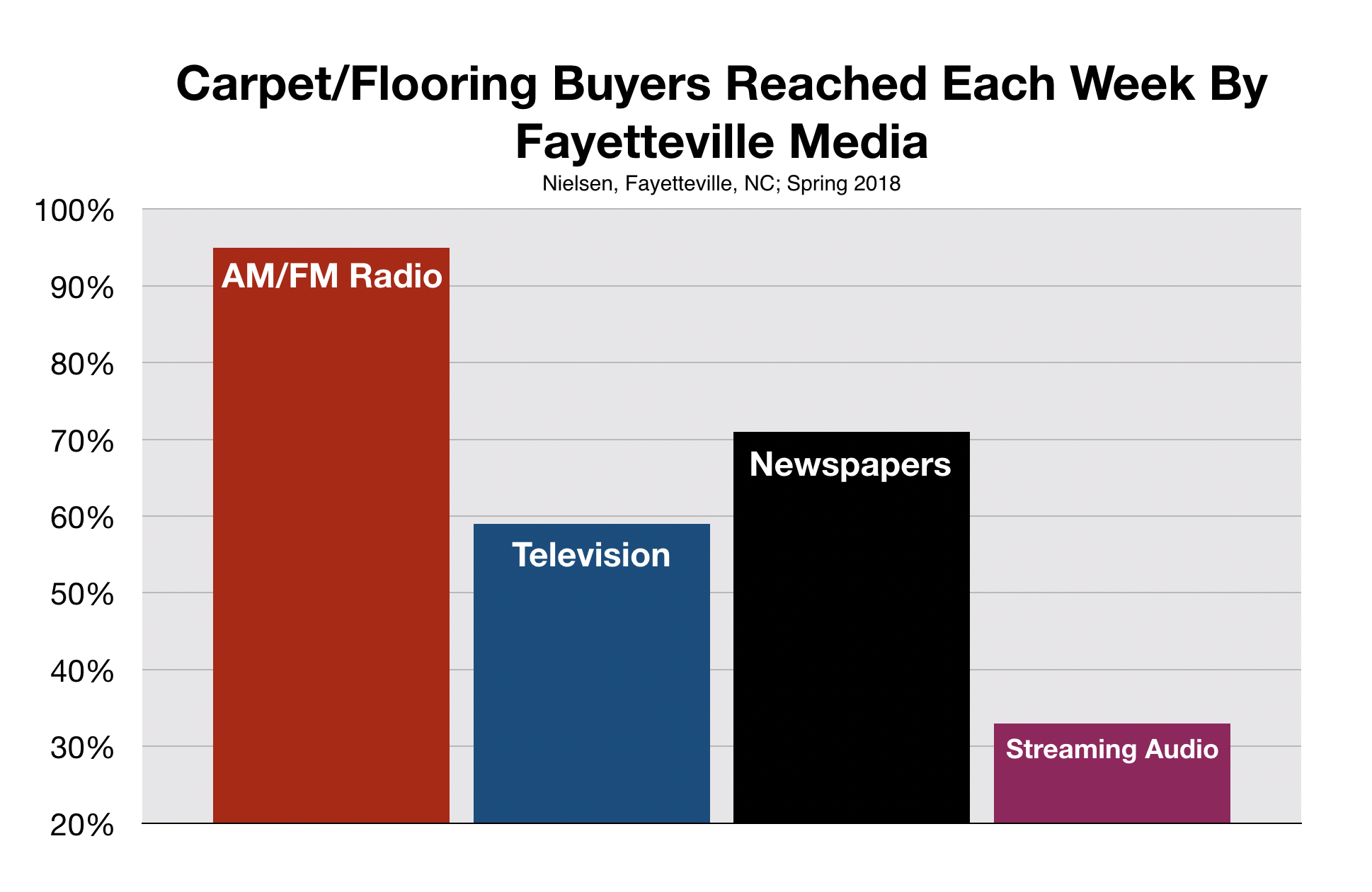 Amie Crouter, co-owner of Cape Fear Flooring in Fayetteville has been advertising on local radio for more than 18 years.

Fayetteville radio's mammoth reach is not just limited to carpet buyers. Furniture buyers, too, are almost universally reached by radio as well. 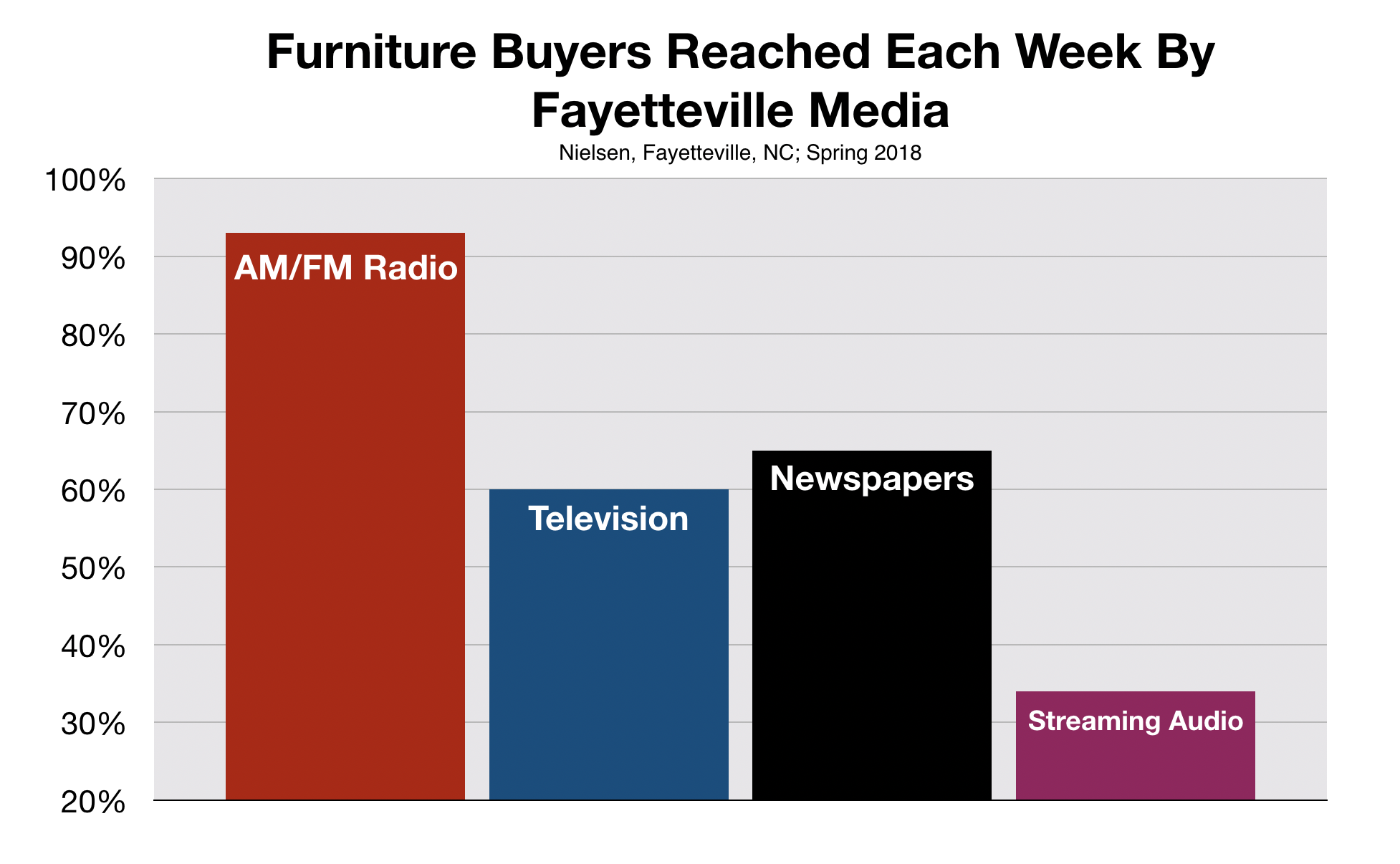 Kimbrell’s Furniture, a small business that has been in business in North Carolina since 1915, has only recently discovered the value of advertising on Fayetteville radio.

According to Cheryl Parker, General Manager of Kimbrell’s Person Street, Raeford Road, and Ft. Bragg Boulevard locations, up until now, the company’s use of radio has been sporadic.

This year, however, Ms. Parker convinced her district manager to advertise on Fayetteville radio continually for six-months. 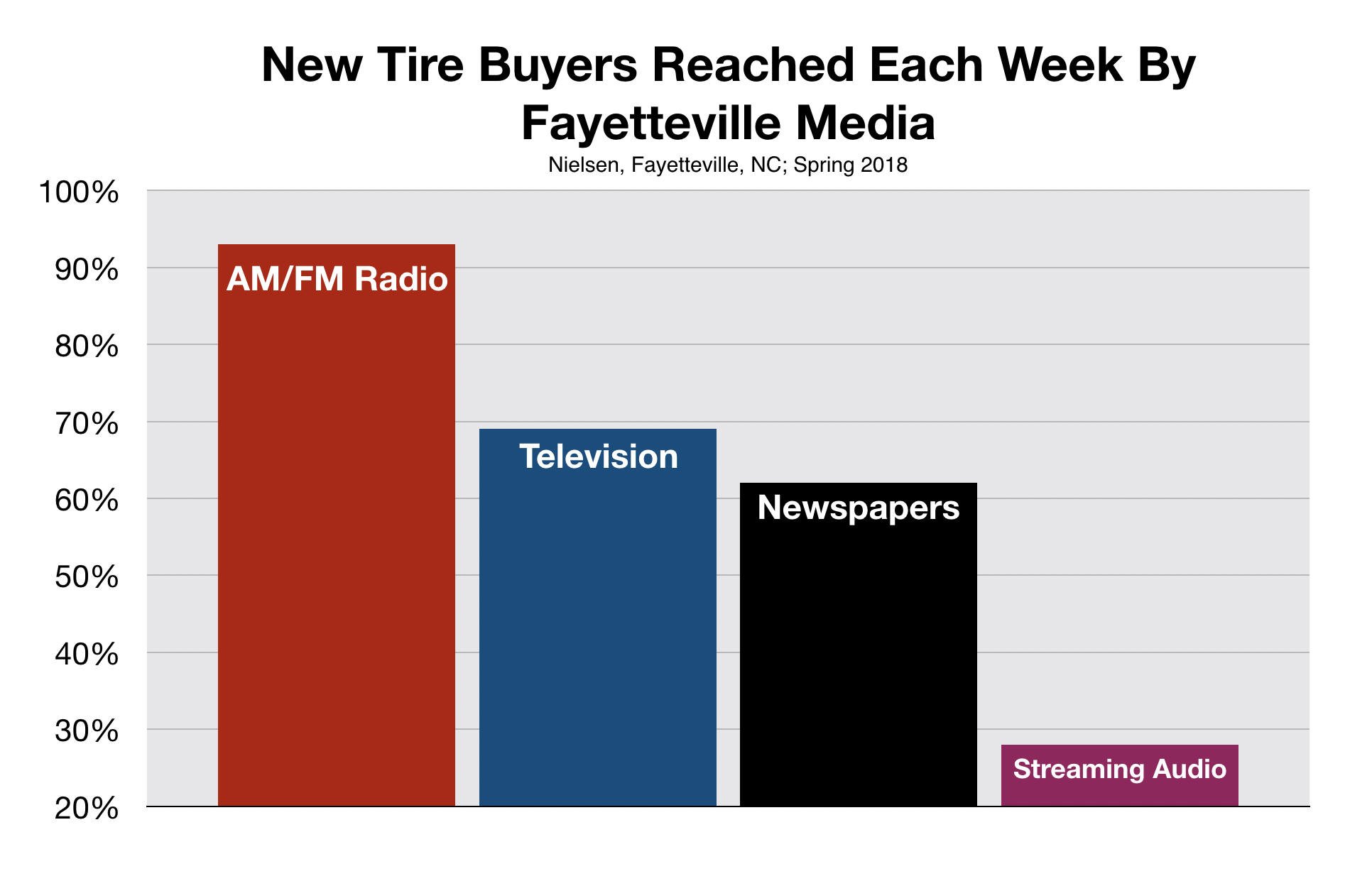 No shopper is immune from the reach of advertising on Fayetteville radio. The medium permeates the life of almost every consumer. Here are a few more examples: 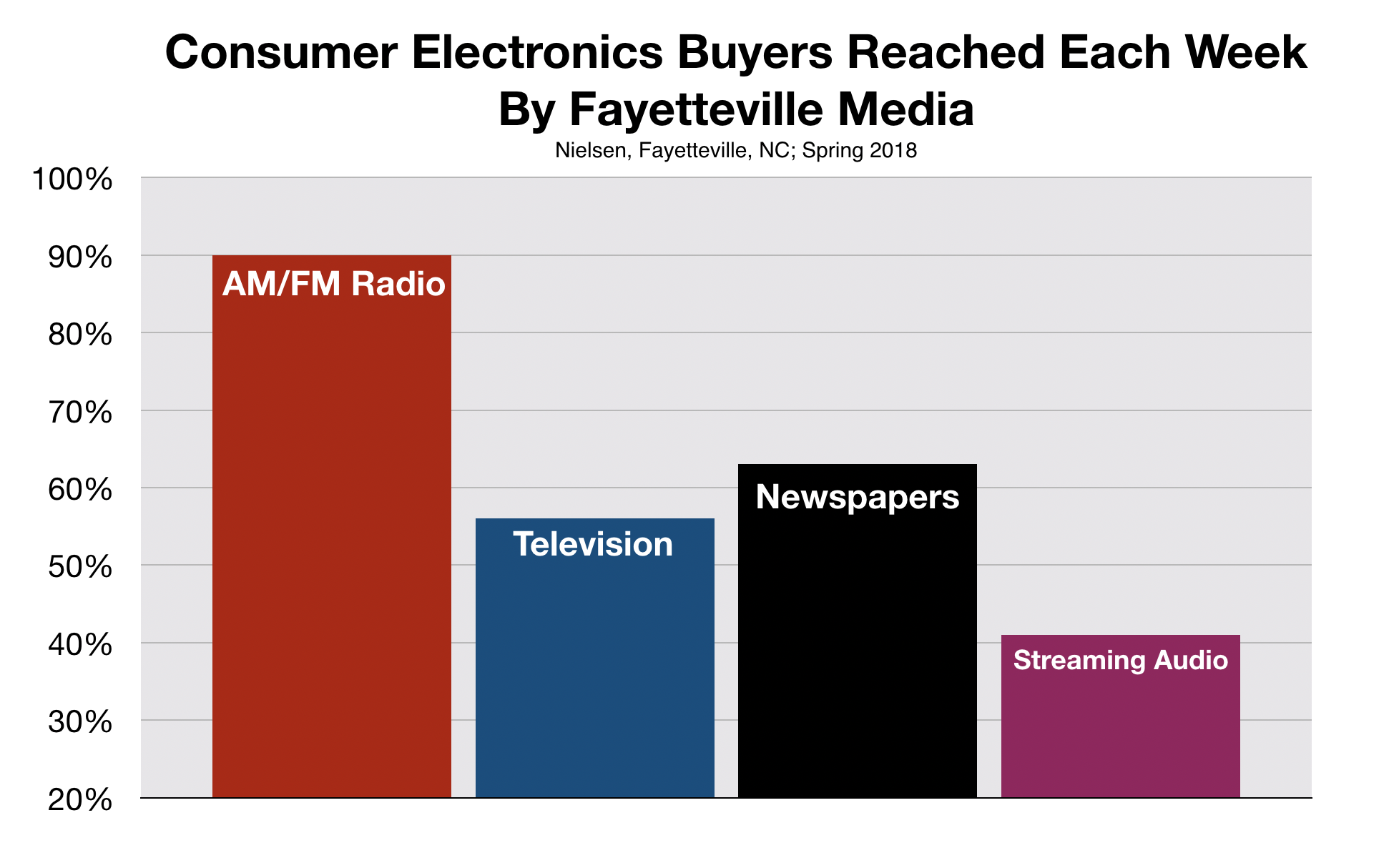 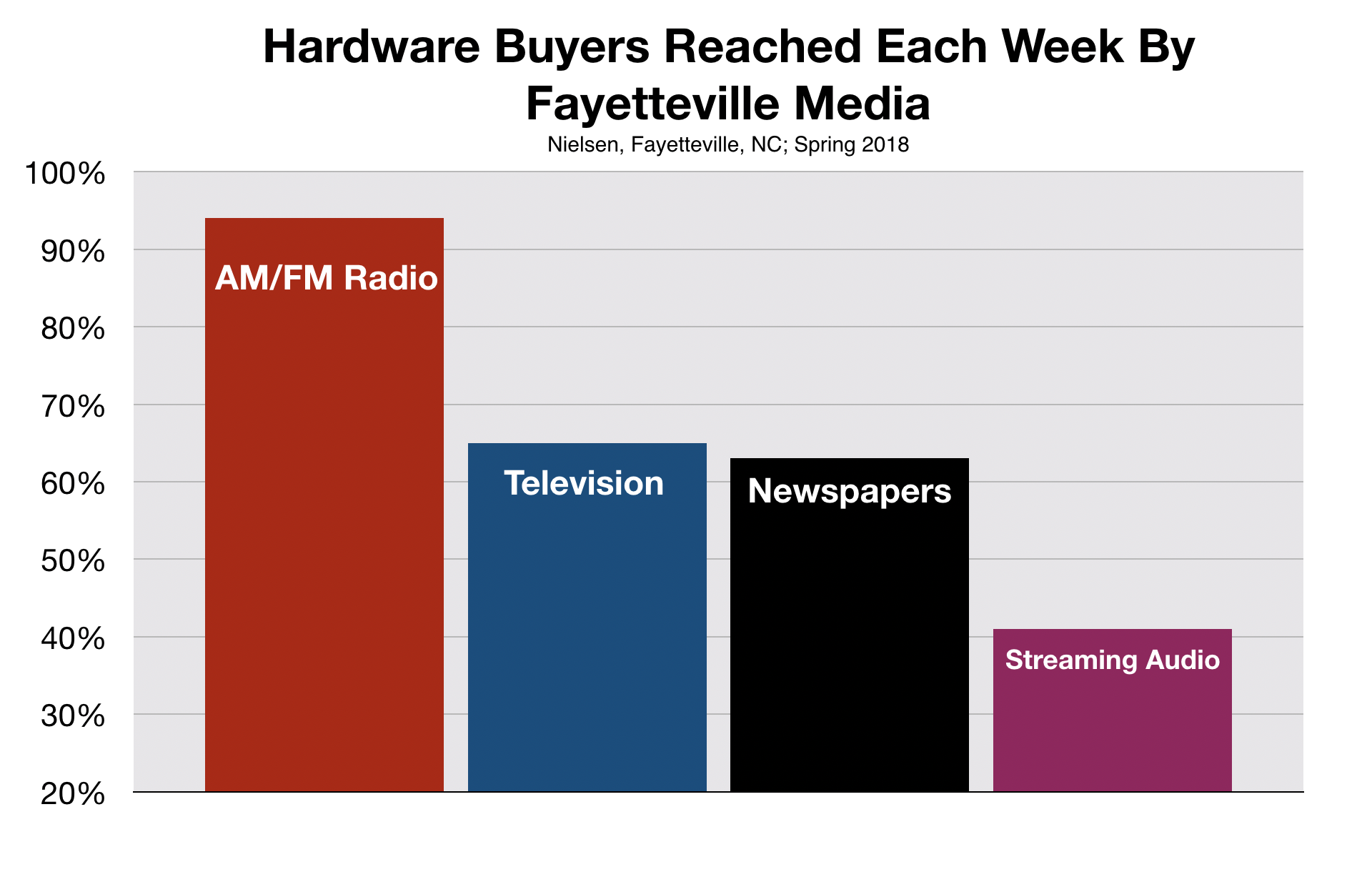 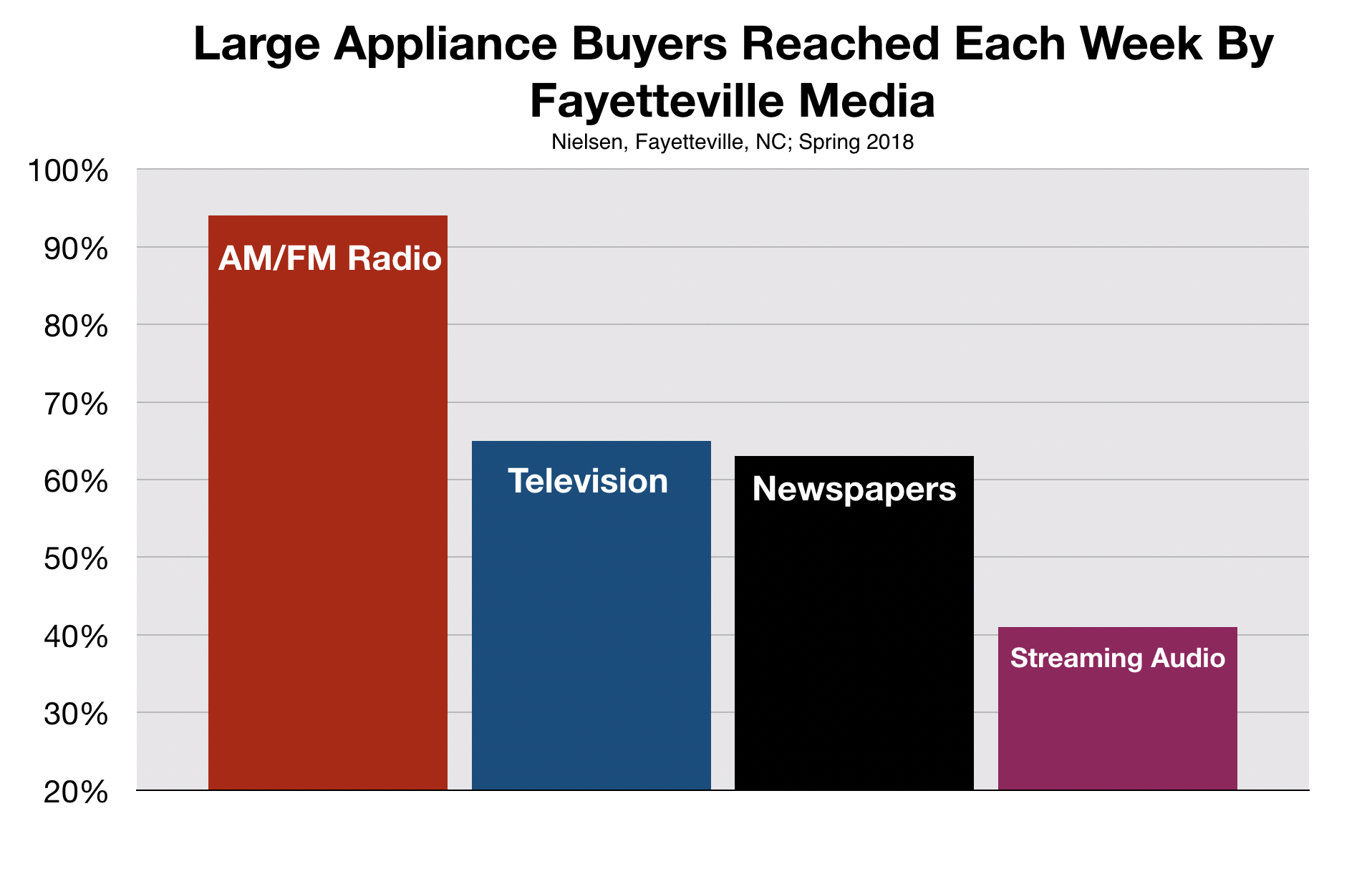 After comparing the value of radio advertising to other media, Deloitte, the world's largest business consulting firm suggests that "radio "should be a big part of the mix for those buying advertising."

Advertising expert Doug Schoen came to a similar conclusion in an article he published in Forbes.

"The implications of results like these are profound for the communications and advertising industries,” he wrote, “and as a marketing professional with over 35 years of experience, I found this data nothing short of fascinating. It’s quite clear that we should all be paying more attention to radio, its reach and potential to help our businesses. It’s doing the job with expert efficiency.”